FUSS or strip capillary surgery is a technique in which we extract hair from the back of the head, then suture and dissect the transplants one by one before implanting them in the receiving area.

What does it involve?

The FUSS hair transplant is carried out by extracting a strop about 25cm long and 1cm wide from the upper nape (above a small bony protuberance called the occipital eminence).

This extraction is carried out under local anaesthetic, which involves a few pinpricks in the rear area, which are bearable, but irritating, and which leave the entire area numb for about 6 hours.

In the FUSS capillary implant, the incision is closed using a specific suture, called a trichophytic suture, which allows the hair to grow through the scar, greatly concealing said scar in the future. 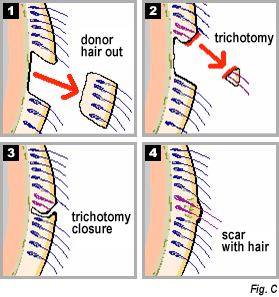 A good suture done by expert hands makes the scar barely 1 mm wide, being completely concealed by hair cut to no. 3, being difficult for even your usual hairdresser to see.


Once extracted, said strip is dissected to divide all the follicular units into units of one, two or three hairs. It is very important that this part of the capillary surgery is done quickly and correctly, making the optimum use of the time the follicle spends outside the body so that is suffers no more than is necessary.

Finally, micro-incisions are made with ad hoc surgical blades, of about 0.9 mm in length, and they are implanted into said incision one by one. The follicular units of 1 hair on the first line and the 2 or 3 hairs behind to lend density. 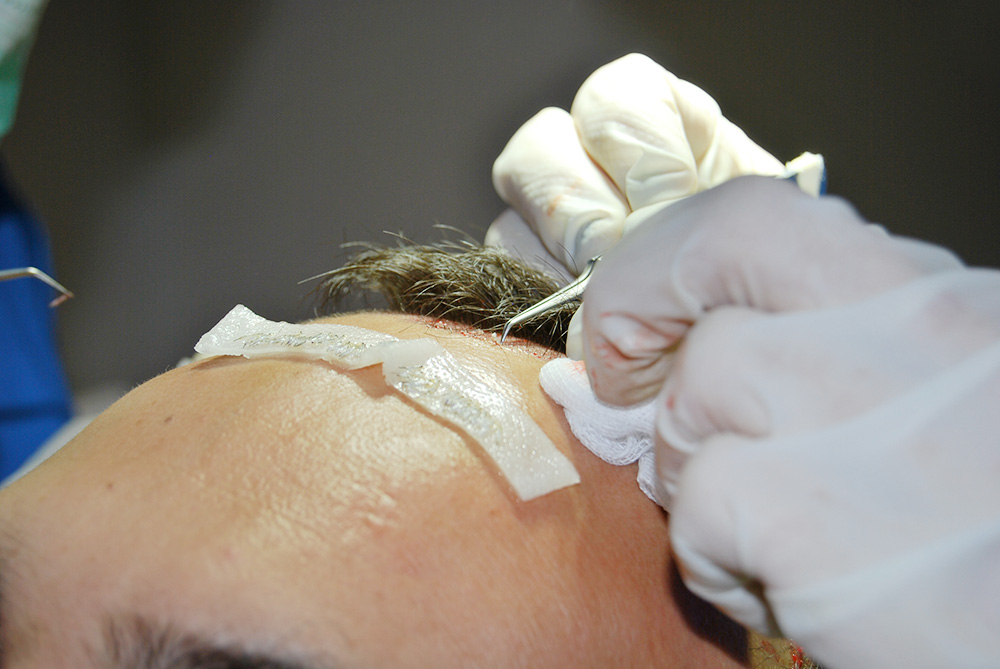 The area is cleaned once all the units have been implanted, and the patient goes home with no bandaging on his/her head.

The patient must not drink alcohol or take any medicines containing NSAIDs for about 48 hours prior to the surgery, as well as try to reduce the tobacco habit as much as possible.

The day of the hair implantation surgery you must come with your hair showered and freshly washed and, a very important point, with a shirt that opens at the front. Not a t-shirt or a jersey to prevent the clothes from touching the transplants when being put on.

It is also advisable that somebody come to pick you up after the surgery, since you may be too tired to drive a car. If this is not possible, the clinic itself will call a taxi for the patient.

When the FUSS capillary surgery is finished, the patient will be given both the medication he must take (for 3 days at the most) such as the special shampoo to use in the days following. Also some very detailed day-by-day instructions which have to be followed very strictly.

The worst day of the post-operation phase is the day of the surgery, though it's not at all unbearable. It's only irritating, and with painkilling medication it is easily overcome. The next day it is very mild and there is almost no need to take medication.

In general washes are not begun until 48 hours have elapsed, very gently.

You can begin to do gentle sport after 12 days, such as racing or riding a bike. Contact sports and weights are not recommended until a month after the intervention.

The suture is removed after 12 days by Dr Ruiz Alconero.

The hair begins to emerge after the fifth month, results start to be seen after 6-7 months and until a year or even a year-and-a-half has passed we shall not see the final and definitive result. Be patient.

Request information or book an appointment

Since it is faster (between 4-and-a-half and 5 hours on average) it is somewhat cheaper.

It leaves a scar at the back which, though it is imperceptible with long hair, impedes wearing hair shaved to number 1.

The resumption of sport is somewhat slower than with FUE.

It does not leave a line scar at the back and therefore you can wear your hair shaved.

The resumption of sport is somewhat quicker than with the FUSS technique.

Somewhat fewer follicular units are obtained than with FUSS (in general about 2200-2300 per intervention, though it is possible to reach 3000).

Since it takes longer than FUSS (about 7 hours) it is somewhat more expensive.